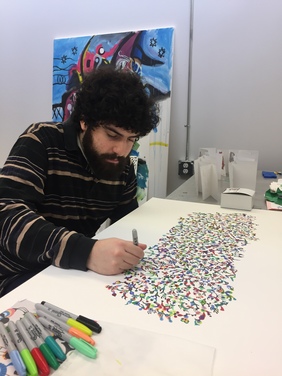 Sam Silverman speaks of music and art with enthusiastic energy and profound passion. Sam is called to creativity, whether he is in his studio creating vibrant and unique works of art or at his piano composing music. He shares openly about a time in his life when mental illness became an obstacle to overcome in his quest for his purpose.

Sam grew up in Beachwood and began playing the piano when he was six years old. After high school, he struggled with depression and lost his desire to play the piano and write music. He enrolled at the Eastman School of Music in Rochester but was unable to complete his coursework.

In 2014, his mother discovered Hopewell, and Sam joined the community to learn skills for living with and managing his bipolar disorder. “Hopewell was a turning point for me,” Sam says. “Before I went to Hopewell I didn’t know I was sick.” He recalls how he learned to recognize the symptoms of his illness and gained insight into his mental health care needs. He remembers a strong sense of community, “having conversations and connecting with people.”

Sam enjoyed working on the farm, walking in nature, and being surrounded by friends who shared his struggles. He was often at the piano in Cottage One, playing his music for residents and staff. “I made so many friends at Hopewell,” he recalls. When Sam left Hopewell after three months, at the age of 24, he had found a new path forward.

Sam currently attends Cuyahoga Community College. He is engaged in independent study with Richard Holsworth who has taught Sam how to orchestrate and go beyond composing only for the piano. Since leaving Hopewell, Sam has finished 120 piano pieces, filling twenty binders with music, and completed a full-length ballet. His music has been performed by Cleveland Chamber Symphony and he has entertained at Nighttown Restaurant in Cleveland Heights.

In addition to composing contemporary classical music, Sam experiments in abstract expressionist art. He explains that the vibrant range of colors he uses represent musical harmonies and the shapes represent rhythms. His unique ability to see sounds and hear shapes and colors, called synesthesia, allows him to invite the viewer into a world of whimsy. Sam utilizes acrylics and Sharpies to create his remarkable works as he listens to music, and acknowledges the musician’s name who inspired him.

Sam is excited to be living independently in his apartment, to own a car, and to have his own art studio space. He speaks of his life after Hopewell with excitement but is also insightful about his responsibility to continue using the skills he has learned to maintain his stability as he works towards his dreams. Sam participates in NAMI in Cuyahoga County and PLAN at Jewish Family Services Association. He also experiments with an art therapist at Partners for Behavior Health & Wellness. Sam shares that after he left Hopewell he continued “doing things to help myself ” and he is an active participant in his recovery. Sam is grateful Hopewell helped him find his place in life and supported him in creating a healthier, healing self so that he may share his creative energy with the world.