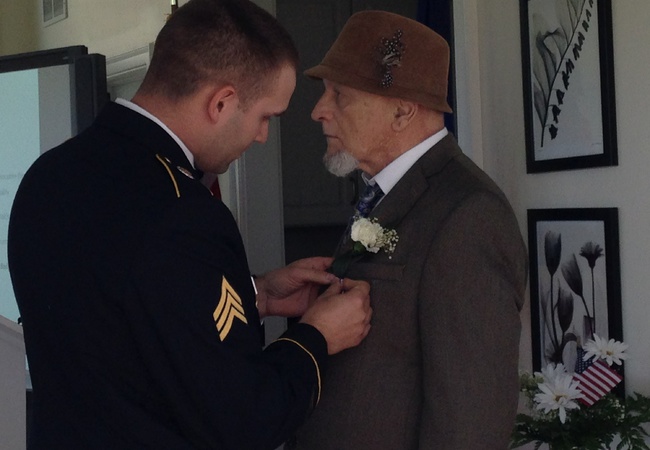 Nearly 40 years after returning home from Vietnam, a Northeast Ohio war hero is finally being recognized for exemplary service to his country.

Mike Erro is receiving six distinguished medals including a Purple Heart and a Vietnam Service Medal with four Bronze Stars. The pinning ceremony is being conducted under the auspices of the Trumbull County Veterans Service Commission.

His long overdue recognition was initiated when U.S. Senator Sherrod Brown's office learned of the situation. Laura Pechaitis, a Senior Constituent Advocate in Senator Brown's Cleveland office, arranged for the special pinning ceremony. The Medal Pinning Ceremony will be held on Thursday, May 22 at 1:00 pm at the Hopewell Therapeutic Farm in Mesopotamia, OH.Trumbull County Veterans Service Commission Director Herman K. Breuer will perform the pinning.

Mr. Erro has been a resident at Hopewell for the past 16 years. He has long battled with Post Traumatic Stress Disorder. Hopewell is a 300-acre residential farm that provides adults with mental illness a place to heal. It is the only therapeutic farm in Ohio.

Mr. Erro was born in Cleveland, OH in 1949. He was inducted into the United States Army in 1967 and was trained as a Light Weapons Infantryman. He served 10 months in Vietnam and was discharged in 1969 with the rank of Specialist 4. He earned six medals in the Army but never received them. He will be presented with the following medals:

Says Hopewell's Executive Director Rick Karges, LISW-S, ACSW, "We're all very proud of Mr.Erro. He served his country during a very difficult war. Like so many veterans experienced, coming back to the states was a difficult transition. He is very honored to finally be receiving his medals. We took him out to buy a special suit for the ceremony. You could see how happy it made him feel."